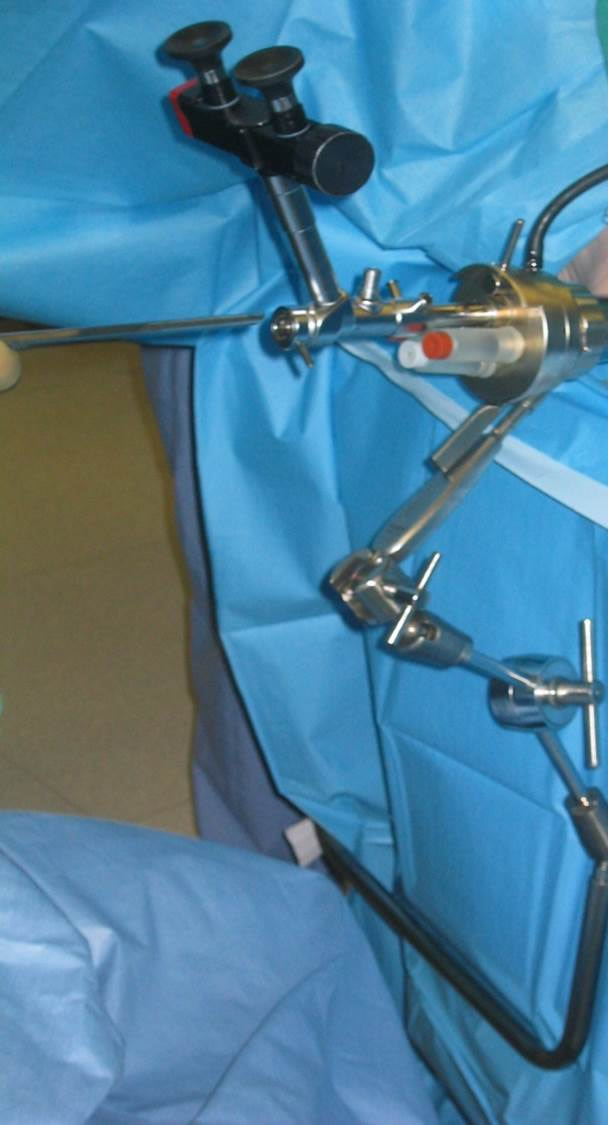 TEMS was first described by Gerhard Buess, a German surgeon, in 1983. It originally involved the removal of benign large tumours of the rectum by ‘keyhole’ surgery through the anus. The procedure has been expanded to remove early rectal cancers.

It is a minimally invasive procedure and the procedure is entirely performed through the anus. Patients undergo the procedure under general or spinal anaesthetic. During the operation, a tube is inserted into the anus and attached to a microscope to allow the surgeon to see the inside of the rectum in magnified 3D vision. Carbon dioxide is introduced into the rectum to inflate it, again to improve the visualisation of the operating area.

Instruments are inserted through the operating tube to dissect and remove the rectal tumour completely.

The operation lasts from 30 minutes up to two hours. After the surgery, there is some pain in the bottom but this is controlled with pain-killing tablets and usually lasts from a couple of days up to two weeks.

What tests are necessary before my operation?

A week or two before your operation date you will be asked to come to hospital for blood tests and an ECG (heart recording) if necessary. You will most likely undergo a colonoscopy (telescopic examination of your large bowel) under sedation a few weeks beforehand to make sure that there are no other polyps or tumours in the bowel. An MRI scan will also be arranged to examine the rectal tumour (whether benign or malignant) in greater detail.

What does the operation involve?

You will be asked to come early on the morning of the operation. You will receive an enema about one hour before surgery so that the surgeon can see the operating area clearly. The operation is usually performed under general anaesthetic but it may also be carried out under spinal anaesthetic. Antibiotics are given during the operation to reduce the chance of infection.

What are the risks of surgery?

The risks are low as the operation is performed through the anus. However, there are risks including bleeding and infection which are small. There is also a small risk of making the muscles of the anus weaker but this should improve over several weeks. A further risk is that the rectal tumour may come back, but all patients receive regular check ups after surgery to look at the operating area.

Why is TEMS a good procedure?

TEMS removes small and large tumours of the rectum which previously would have involved a large operation through the tummy. It removes the tumour completely and the chances of the tumour coming back afterwards are small. Patients recover very quickly after this surgery and are usually discharged from hospital after one or two nights’ stay.